We went to one of those indoor jungles today.

You know, the ones where the kids run about like wild beasts and the parents pretend this was a great idea.

Kids love these places, why wouldn’t they! Complete and utter freedom to let out their inner monkey and be as loud and crazy as they like… Well, to a certain extent. I draw the line at eye gouging, which is practically what happened to my 15 month old. Herself and another pre-social-being locked eyes across the foam ladybird. Rosie was going in for the chat, however her ‘friend’ must have misread the signals and instead used her vicious baby claws to grab Rosie by the tiny skin between eyes and temples. The other mum came swiftly on the scene in apology for her baby Bear cub and could be seen apologising her way around the entire toddler section.

It’s not just the cat fights and toy tug-o-war you have to be wary of, really you’re taking your life in your hands in these places; they’re a cesspit of snot, dribble and God knows what other bodily fluids. As kids happily suck on coloured ballpit balls I imagine a stampede (herd?) of tiny bacteria charging down their throats and am sure they now have the plague.

But the ball pit, one of my own favourite places as a kid. Really I’ve no idea why, and I don’t think I new why I liked it so much back then either. At one point today while the girls were playing in said pit, a little skin coloured fish could be seen poking it’s wee head up. Turned out it was a boy. He had been doing a great job of hiding on his brother, who proceeded to show me his bellybutton and sore finger simultaneously.

I wonder do jungle gym workers (do they have a title? I feel like they should.. zookeepers?) find long lost kids in the ball pit at closing time?

The Ark Community Gardens in Newcastle co Down is a lovely wee haven just outside the town on a relatively small piece of land. But they sure do pack a lot in! They have a couple of poly tunnels with veg and herbs, a spacious chicken run, a small cabin gift shop, and a large selection of outdoor plants. The Ark also has other hut’s and tunnels for community groups to come together and make use of. A simple yet wonderful asset to the local area. 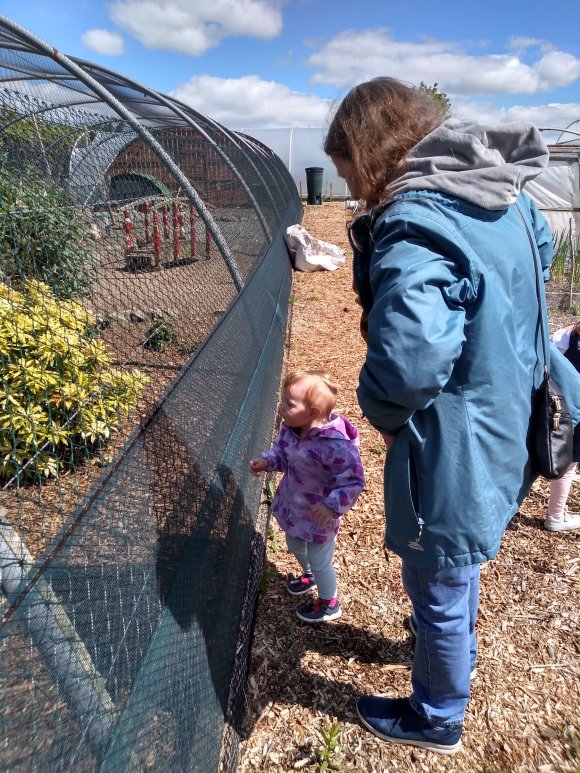 Our main reason for our trip was to purchase some locally grown organic veg. Which we did. 2 large leeks (the height of my 4 year old!) 3 Bunch’s of scallions, a couple large onions and a bag of peas in their pod (is there anything more satisfying than cracking open a pod?)

Going to a place like this and buying veg was good for the soul indeed! Not to mention reducing our carbon footprint by buying local produce.

So here are my 5 top tips for an eco friendly food shop..

There you have it, 5 simple yet effective little tips. If we all implemented these things just think of the difference we would make!

So here I begin my first ever blog post! And for some reason I’m weirdly nervous. It has taken me a good few months to get going! Partly because of other commitments and responsibilities and partly because of a fear of failure or general uncertainty. Or whatever.

Anyway, here I am, a mother of two beautiful girls (Farrah 3 and Rosie 6 months), wife to Paul, (an amazing chef that you’ll hear more about later!) and a work-from-home-around-the-kids artist.

Motherhood is just so crazy and lovely that I have to write about it! Throw into the mix a busy art career among other things and it’s certainly a recipe for a good story or two. But don’t worry, it’s not all nappies and nightmares, I will have some valuable tips, tricks and How-to content as well!

So join me on this journey of laughs and tears, tantrums and giggles!